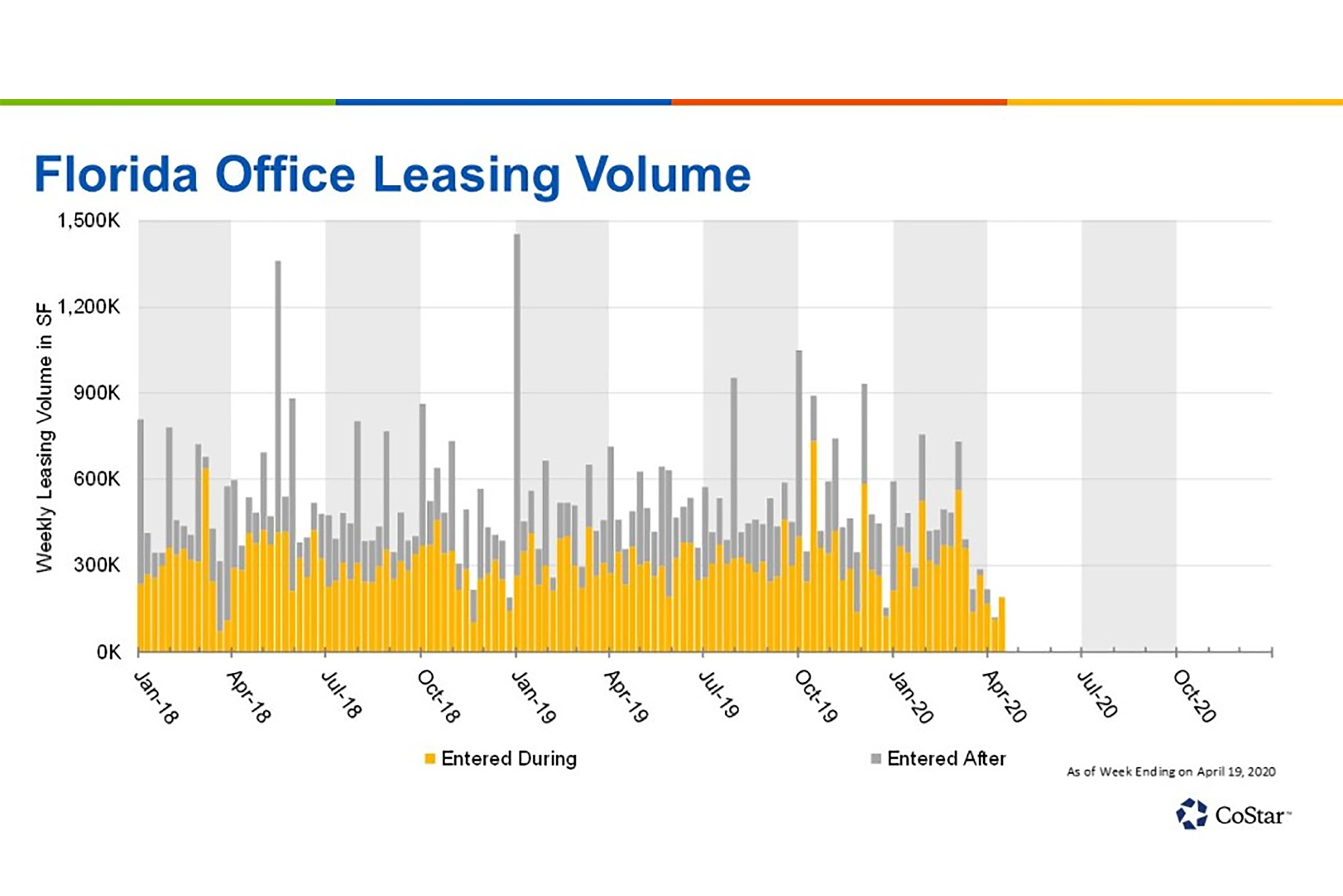 There has been a steep drop-off in office leasing activity since the coronavirus was declared a pandemic on March 11. The first full week after the announcement, which began on March 15, saw just over 200,000 square feet in office deals signed across all Florida markets. This compares to more than 400,000 square feet in the same week for both 2019 and 2018.

The slowdown has continued in the weeks since, with the first week of April seeing some of the lowest leasing activity in Florida in years. Including deals which have been collected after the end of that week, just over 100,000 square feet of office space was leased across all Florida markets.

In Orlando, less than 100,000 square feet of office space has been leased in the five weeks since March 15. This is in stark contrast to the nearly 600,000 square feet which was leased in the market in the first five weeks of 2020. Orlando has posted the steepest decline of Florida’s largest markets since mid-March. The average weekly leasing activity has fallen to 21% of what it was in the first 10 weeks of the year.

Among Gulf Coast markets, Sarasota appears to have been the most impacted by the pandemic, with weekly leasing activity just below 25% of that entered in early 2020. In aggregate, the three counties in Southwest Florida — Charlotte, Lee and Collier — saw office leasing volume decline to just over 40% of that achieved in the weeks just prior to the crisis. Tampa has recorded weekly leasing activity falling to just over 50% of what it was during the first 10 weeks of 2020. Less than 280,000 square feet was leased in the five weeks after March 15, compared to over 470,000 square feet in the first five weeks of 2020.

The results vary among Florida’s other large office markets. In North Florida, Jacksonville’s recent leasing activity has been about 55% of its pre-pandemic pace. Miami has been one of the most resilient markets, with activity still nearly 60% of volume, while the other South Florida markets haven’t fared as well. Both Fort Lauderdale and Palm Beach fell to less than 40% of pre-coronavirus levels.

Despite the dampening effect of the ongoing pandemic, landlords and brokers are still pushing deals across the finish line. While activity has slowed, it shouldn’t be ignored that this much square footage has been leased in the midst of social-distancing policies and various stay-at-home orders across the state. During this time period, more than 20 office leases have been signed across Florida in excess of 10,000 square feet.