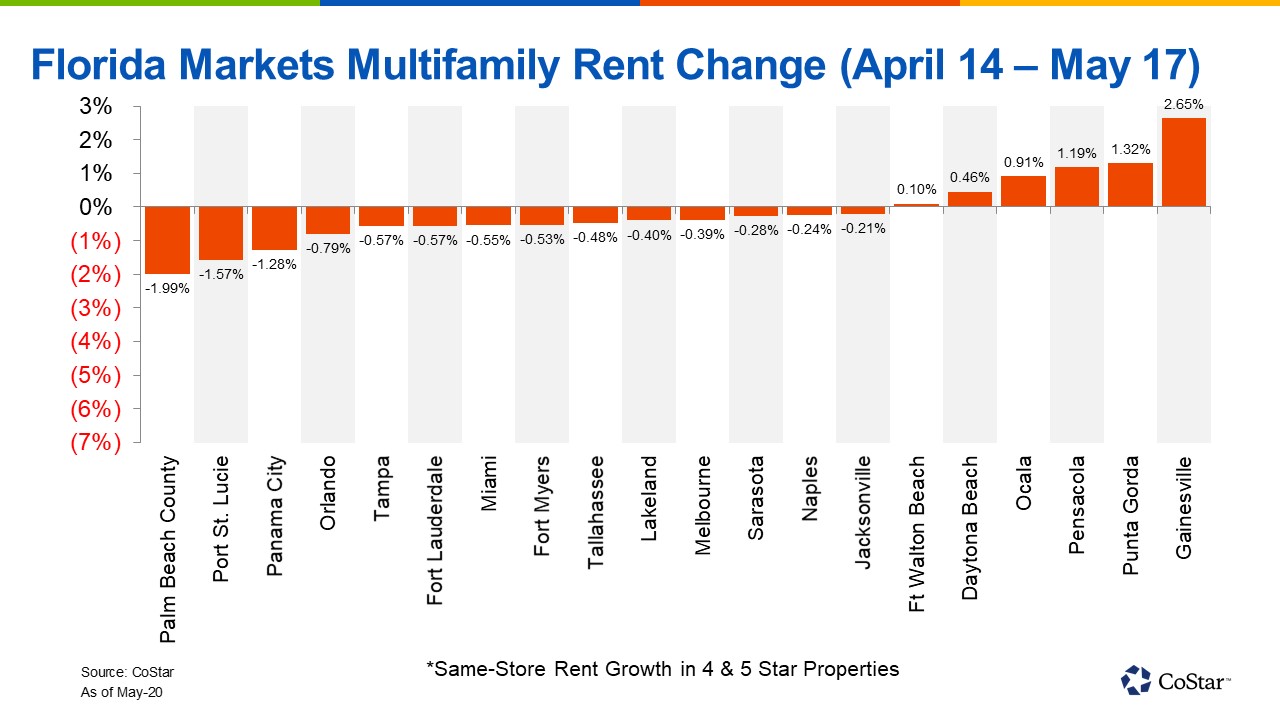 Most Florida multifamily markets held up relatively well from mid-April to mid-May. No market in the Sunshine State saw asking rent losses among the high-end and luxury housing sectors in excess of 2%, and six of the 20 largest markets even experienced increasing asking rents.

This was a dramatic improvement over the first month of the pandemic, when nearly every market posted deep asking rent losses. Roughly half of all Florida markets saw asking rents on luxury units decline by at least 2% from mid-March to mid-April, including over 5% losses in the tourism-dependent submarkets of Punta Gorda and Fort Walton Beach.

The turnaround was likely due to Florida Governor Ron DeSantis enacting a stay-at-home policy that went into effect on April 3 and lasted through the end of the month. Florida’s multifamily landlords and owners appeared to have been aggressively trying to lure renters in the weeks ahead of the lockdown. Once Floridians were sheltering in place, effectively cutting off typical multifamily demand, there was much less incentive or reason to modify asking rents.

Among Florida’s largest markets, Jacksonville has consistently seen luxury asking rents hold up comparatively well since the pandemic began. While asking rents continued to fall in the upscale apartment sector from April 14 to May 17, the average asking rates across all multifamily property classes actually rebounded by 0.2% in that time. In fact, the overall average asking rent in Jacksonville on May 17 was higher than it was at the end of 2019.

In Orlando, the average asking rent in high-end apartments has fallen by 3.5% since March 11, but the asking rent across all multifamily classes has fared slightly better. Altogether, Orlando’s asking rents fell 2.8% from March 11 to May 17. In luxury units, losses went from 2.8% between March 11 and April 13 to 0.8% between April 14 and May 17, but across the entire Orlando market, rent losses softened from 2.2% to 0.6% over the same periods.

The only large market in the state to post comparable asking rent losses in the luxury housing sector during the second month of the pandemic was Palm Beach. Luxury asking rents declined by approximately 2% from mid-April to mid-May, after falling roughly 2.4% over the prior month.

The state’s other large markets held up relatively well over the past month, with Fort Lauderdale, Miami, and Tampa each posting asking rent losses of just under 0.6%. Florida’s biggest asking rent loss market in weeks following the onset of the pandemic, Punta Gorda, witnessed one of the biggest reversals of fortune since mid-April with asking rents increasing by 1.3%. Other markets posting positive asking rent growth over the past month include Fort Walton Beach, Daytona Beach, Ocala, Pensacola and the Gainesville multifamily market.

With the rapidly changing environment presented by the ongoing pandemic, CoStar’s multifamily daily same-building rent series offers perhaps the closest approximation of real-time data in the industry. We have further segmented out four- and five-star properties, as those units tend to be institutionally-owned and are more likely to update their rents on a daily basis.