Job Gains in Miami Improved in June, but Coronavirus Pandemic Puts Pressure on Momentum in July 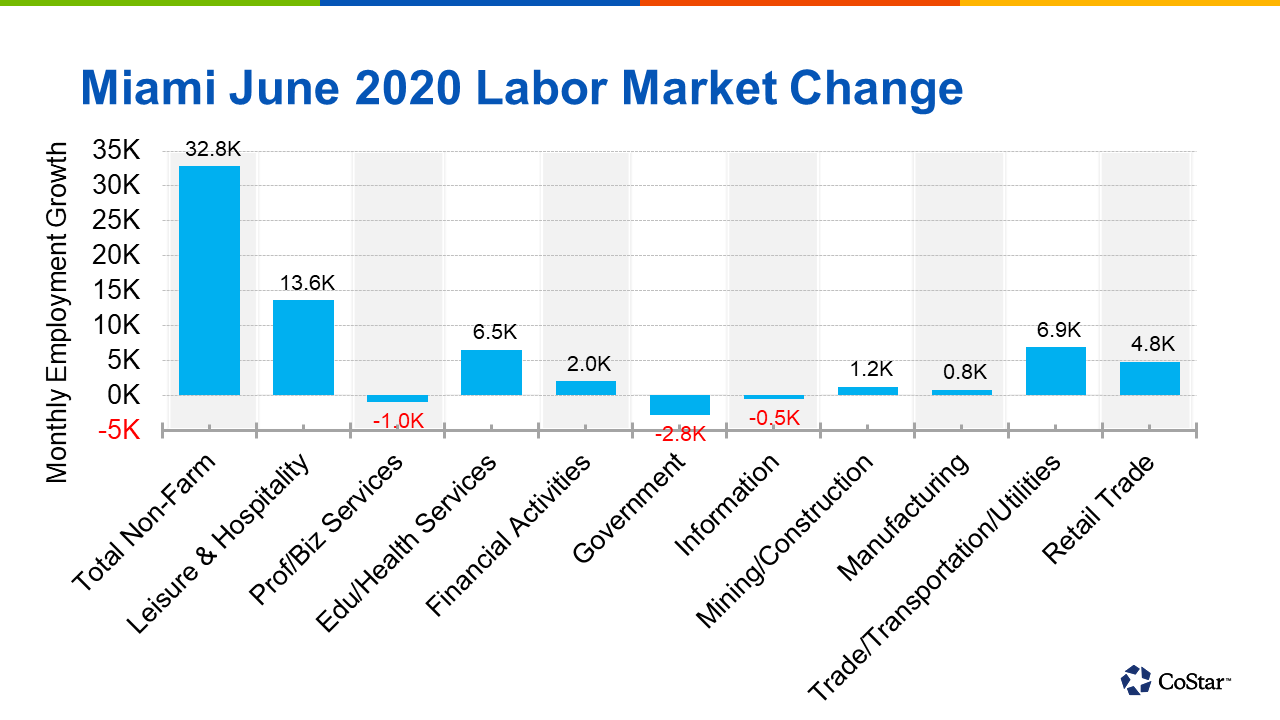 Over May and June, Miami recouped close to 40% of the jobs that were lost in April.

Close to 33,000 jobs were added in June, far surpassing the 25,500 jobs that were added in May. But the momentum came under pressure in July, as phase one of Miami-Dade County's reopening process was suspended in late June after coronavirus cases surged across Florida.

If the job recovery stalls, and given that Miami’s service-driven economy has been under pressure for close to six months, many small businesses across the market could fail. Closures would not only result in job losses, but will likely translate into a significant amount of vacancy, especially in the visitor-driven retail areas and the suburban office markets.

Leisure and hospitality, a sector that holds close to 10% of Miami’s jobs and has been the worst affected by the pandemic, led the June gains with 13,600 jobs, surpassing the 11,500 jobs gained in May. Employment creation in this sector is especially meaningful, as it was powered mainly by Miami resident demand and came in the middle of Florida’s hurricane season when visitor traffic is significantly lower.

The majority of Miami’s leisure and hospitality businesses employ fewer than 50 workers. Miami’s restaurants and hotels have been operating under significant restraints since early March, while all entertainment venues remain closed.

While operation guidance comes from the county’s 34 municipalities, most financial assistance for small businesses in the leisure and hospitality sector came from the federal government in the form of loans.

Office-using employment, which includes professional and financial services and accounts for close to a quarter of Miami’s job market, added 500 jobs in June. The sector shrunk by 10% in April, mostly driven by job losses in the professional and business services industries. June gains were underwhelming when compared to the 3,000 jobs added in May.

The health and education sectors, which together account for just over 15% of Miami’s job market, ramped up gains and added 6,500 jobs in June, significantly surpassing the 2,400 jobs added in May. Close to half of the April education and health services jobs that were lost were regained over May and June, making it the best performing sector since April.

Trade, transportation and utilities, which together account for a quarter of Miami’s jobs, also saw gains pick up steam over June. The sector added close to 6,900 jobs, up from 2,300 jobs gains in May. However, when accounting for the close to 30,000 April job losses, this sector has only recovered a third of its losses, making it the worst-performing among Miami’s major economic sectors.

Coronavirus cases in the market have dropped over the past few weeks, offering some hope. But social distancing measures are likely to remain in effect for the foreseeable future, something that will continue to put pressure on economic sectors that rely on people's movement and gathering.